I've come across another challenge on ismellpackets.com. This time it was about analyzing a pcap file. When we open the OperationNEPTUNE.pcap in Wireshark and going to Statistics->Conversations we see a couple of TFTP file transfers.

Usually we extract the data by following the TCP/UDP stream, specifying the direction on which the data is sent, "save as" then clean the added data with a hex editor (Okteta or MadEdit on Linux). 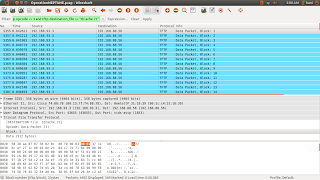 This means that not only we have overhead data at the beginning of the stream but also in the middle.

Sometimes, 4 bytes for each 512 bytes of data is not a big deal like a .wav file in this pcap where It was readable and not really altered by removing 00 03 00 01 at the beginning only (It should be removed because each file begins with it's format's magic number which is the beginning of data1 in this case).
But in other cases, like a .7z file contained in the same pcap, the integrity of the data shouldn't be altered.

Obviously, it would be very non-productive to clean all the data stream manually with an editor.
In Wireshark we first filter out packets that don't interest us, applying this display filter:

Then we go to File->Save As..., select Displayed and choose a file name.

After that we fire Scapy and read the pcap file.

Then we iterate over the packets list and write the data to the output file without the first 4 bytes.

and that is it.

We could have used automated pcap extraction tools like NetworkMiner on Windows or Xplico on Linux (Both are Open Source and free), but nothing beats Scapy, the networking Swiss Army Knife. ;)
Posted by Hani Benhabiles at 8:26 PM
Email ThisBlogThis!Share to TwitterShare to FacebookShare to Pinterest
Labels: Networking, Scapy, TFTP, Wireshark