Yesterday, November 26th, I attended the Software Freedom Day Algeria 2011 in Medea and I still don't know what I liked the most. We arrived around 9:30AM and were amazed by the beauty of the town and how large and architecturally gorgeous the university is.

First talk was by Taha Zerrouki on Open Source software in the service of the Arabic language. I didn't know that there were so much efforts and projects focusing on arabic vocalization ("chakl"). You could check Taha's work on his blog.
As the Debian Project talk was cancelled, it was time for Groupe Fedora Algérie presentation by Lamine Belbachir who was replacing Djelloul Bouida. I've met the guys at a GNU/Linux install party I was involved into last July and I can witness how great and helpful they're. Keep up the good work!

After that Our own Halim presented the Algiers Google Technology Group, I already know this presentation as it was done last month when the group was first launched. Following him was Madjda presenting Mozilla Algeria talking about the values of Mozilla, how it isn't just about a web browser and the role of local communities. As expected in the Q&A part, people were whining about how slow is Firefox compared to Chrome. :D
Next was Bilel Sam from the AAUJ (Algerian Association of Joomla Users) talking about... Joomla. Some interesting things he talked about were the work on localisation of Joomla to Algerian dialect. Though some of the audience didn't really like it and there was even one person who said that it's "ignorance promotion"... I couldn't disagree more with him.If you're ashamed of your culture and heritage, please spare us of your nonsense. Again, the expected question about Joomla's security was asked with the typical answer of doing your homework by updating as soon as possible and not installing random modules. 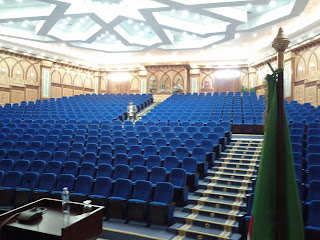 After lunch, it was time for conferences, workshops and booths visiting in parallel. I was supposed to be at the Fedora booth for the install party but as there wasn't much work to be done, I spent most time catching up with friends I've met at the event. I attended the talk about Information Technology Watch by Karim Kheliouati. Nice information about the use of social networks and different tools like Google Reader and Alerts. Fun talk, lots of laughs and great speaker. :D

It was a shame that I had to leave a bit early to not miss the last bus. There were many talks I was waiting for such as Ismail Chaib on OpenData, my friend Djamel from the recently created Algeria Java User Group on ThinkQuest and Djalal Harouni's workshop (who's very known for his work on Nmap) on Free Embedded Systems.

Overall, though some delay in the planning, it was a great event. Kudos to the organisers for the great work and being kind and helpful all day. Big kudos to Abdelhak Fareh, well done!